What really matters: Measuring government accountability and moving beyond GDP 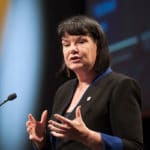 COVID-19 has exposed a failure of governance in most countries as governments have neglected the needs of their people. A new ITUC report, What really matters: Measuring government accountability and moving beyond GDP, sets out a global agenda to rebuild trust between citizens and governments, shift government policies and measure what matters to people.

“People are losing trust in democracy at a time when we most need inclusive leadership from people elected to represent us in our parliaments. Even before Covid-19, governments presided over national economies that have failed working people and their families. While the response to pandemic saw the greatest act of solidarity to stop the spread of the virus, the crisis of democracy threatens to derail plans for recovery and future resilience,” said Sharan Burrow, General Secretary, ITUC.

“Seven months into the global pandemic with nearly 500 million jobs lost and billions of people pushed back in to poverty, we know we that to rebuild our economies and a sustainable future, we need a new social contract and that contract must be built on trust.

“For too long, government policies have been measured against the narrow definition of the gains and losses of a country’s GDP. Rebuilding strong democracies and inclusive economies will require governments to change their approach. They must broaden their view to measure what really matters. In this report, we debunk the myths of GDP and show why it is an incomplete measure of economic progress,” said Sharan Burrow.

The report shows how GDP:

Policy responses to the climate emergency have been limited by GDP measuring the current economic model of production and consumption.

The new ITUC report sets out six indicators against which governments can rebuild trust. These indicators are the standards to which we must hold governments accountable in order to deliver a fairer world as we move beyond GDP:

As part of the Frontline Campaign ‘Democracies For People’, the ITUC has launched a Democracy Pledge for people to make commitments to get involved in democracy from voting to running for office to fact checking fake news to taking part in a socially distanced rally to asking someone to join a union.

“Democracy only works if people get involved. It will take political will, but together we can shift the political debate for governments to measure what really matters and use this new government accountability to build trust in democracy. The consequences of the collapse of democracy are too severe to ignore,” said Sharan Burrow.

Sharan Burrow was elected General Secretary of the ITUC at its Second World Congress in Vancouver, June 2010. Prior to this, she held the position of ITUC President since its Read More