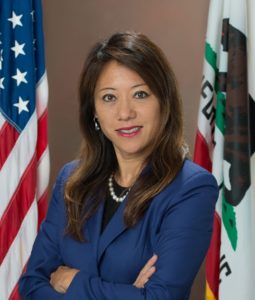 In our “Meet the Council” series, hear directly from the our Stewards and Allies why they are committed to making business fairer, more inclusive, and more sustainable.

Fiona Ma is California’s 34th State Treasurer. California is the world’s fifth-largest economy and Treasurer Ma is the state’s primary banker. Treasurer Ma oversees an investment portfolio that has averaged well over $100 billion in her administration. Of that amount, 30% is beneficially owned by 2,200 of California’s 4,400 units of local government.

How do you interpret the “moral imperative” for inclusive capitalism?

I view [it] as a calling to lead by example. The Catholic social teachings underpinning this perspective on morality advocate for equity according to the same fundamental reasons that I do: a system that allows everyone to participate equally and to lives of dignity is a stronger system for everyone. This moral imperative is why I have championed diversity, equity, and inclusion efforts as California’s State Treasurer, a governmental position not often thought of as maintaining any influence over these issue areas. I believe that leaders of organizations of all kinds must take deliberate action in order to effectuate the change we hope to see in the world.

In what ways has the influence of the Council motivated you to act?

Renowned futurist William Gibson stated that “the future is already here – it’s just not evenly distributed yet.” I recognize that, for too long, capitalistic systems have unfairly and disproportionately rewarded the powerful and wealthy. That is why I am proud to Chair the Boards of several thrift programs housed in the California State Treasurer’s Office that enable and encourage ordinary individuals’ participation in a system that might otherwise leave them behind. These include savings programs for employees of companies that do not offer retirement benefits, families hoping to save for college, and individuals living with a disability. As a part of my role on the Council, I’ve committed to dramatically increasing enrollment in these three savings programs and our milestone data suggests we have been tremendously successful so far.

As a member of our Steering Committee from the very beginning, you have been an active voice encouraging others to join the Council and engage with the moral imperative. How important is peer-to-peer collaboration to you?

The goal of inclusive capitalism cannot be achieved by one leader, or one organization, or even one country alone. Instead, I understand this “moral imperative” to be intrinsically tied to collective action. I’ve taken this call for peer-to-peer collaboration as a mandate to partner with other leaders of government and business to join me on the Council in making bold organizational commitments that help produce a more inclusive economy.

In addition to the coalition-building work I’ve engaged in on behalf of the Council, I’ve also seen this collaborative ethos as an obligation to work in partnership with my counterparts in state governments outside of California. A fourth commitment I’ve made as a part of the Council pushes me to look beyond my own office and my own state by asking other State Treasurers to join me on a Green Bond Honor Roll I’m establishing. This commitment aims to prioritize environmentally friendly finance for publicly financed projects and investments across the entire country.

When most of us think of Capitalism, we think of for-profit businesses selling goods or services to make money. What role do government financial agencies have in shaping the economic system?

Highly functioning and inclusive capitalistic systems flourish and survive only when governments set rules that treat each element of the overall economy fairly. In short, laws and regulation that establish and protect property rights for a select few must be accompanied by laws and regulation that protect the public interest, including the rights of workers.

When owners of the means of production (capital assets and financial assets), gain outsized influence over government regulations and policies, the public’s interest may be impeded or distorted. Economic equality breeds the long-term success of any free market economy.

Governments should focus on investments in both hard and soft infrastructure assets to support both the ownership class and the workers. Examples include, relevant educational systems, worker education and retraining, workplace safety protection, and the physical assets needed to move goods to and from the marketplace.

Give us an update on the success and impact of the CalSavers program, California’s new retirement savings program for those without one provided by an employer.

It’s still early days but we’re already seeing great success, despite the challenges of rolling out a new program during a devastating global emergency. More than 13,000 employers have registered for the program, 377,000 workers have enrolled, and nearly 165,000 workers have begun funding their accounts. Our participation rate is 70% among all eligible employees, and those workers have saved $100 million as of the end of July.

We’re proving every day that when given an easy, automatic, portable way to save via their paycheck, most people will do so, even those with lower incomes. The average income of our participants is about $25,000 per year and we’re impressed and humbled that they’re saving for the future even while experiencing cash flow challenges.

We’re also very pleased to see a measurable growth in the private retirement plan market as a result of our employer mandate. Plan providers are seeing an opportunity to serve the lower dollar account space now that larger scale activation is expected. We count that among our successes.

How do programs like CalSavers progress the ideal of an inclusive capitalism?

CalSavers is leveling the playing field for private sector workers who go to work every day, follow the rules, yet until now have had unequal access to financial tools. By creating a mandate for employers to facilitate but also making it free and easy for them, we eliminate barriers and open up access.

When workers have equal access to high quality, affordable financial tools, with employers playing a simple facilitating role, we’re a step closer to an inclusive financial system. Individuals can manifest their true potential when they have the confidence of knowing that they’re on a path to long-term financial security, and that serves communities and economies alike.

Fiona Ma is California’s 34th State Treasurer. She was elected on November 6, 2018 with more votes (7,825,587) than any other candidate for treasurer in the state's history. She is Read More